When working on a solution for Wordpress, a local development environment is a great way to manage code repositories and keep things quick - with room to experiment. I have friends who still use plain old css, and work off a server using SFTP like some sort of pirate. I don’t know how they have managed it for so long. I couldn’t live with out services such as SASS, Webpack, Parcel, Babel and ES6, and most of the solutions that lead us to today (has anyone heard from gulp in a while? ).

Part of my older web developer friends issue is the fear of the command line and the idea that running a local server is daunting.

My go-to local environment for the last seven years has usually been MAMP Pro. It allows me to add as many custom domains as I need to (with SSL) and I am up and running in minutes with the choice of Apache and Nginx. Great! This is especially handy if I need two Wordpress instances running at once.

As it always happens, I recently employed Virtualbox to fire up a few virtual Linux servers while run tests and writing scripts for an app I am working on. This has always worked out OK, but it isn’t all that efficient and a lot of time is wasted experimenting and refreshing images. There will always be a place for them as far as I can see it, just not for those times when I trying a new technology or firing up a temporary server.

After reading and hearing about Docker for what feels like years, I finally took the time to wrap my head around it.

Docker gives you the ability to house server based applications in containers on your local machine. This has given me the ability to try anything from a basic web server to unique FFMPEG builds with no trouble and a lot faster. More often than not, without all the heavy lifting and package management that comes with custom server based solutions.

Making things even easier again, there is docker-compose.

Docker Compose allows for quick deployment with predefined settings. This basically means you can run pre-built containers with the files required to run server based applications, without the need to fire up an entire server. You can even create a small virtual network between them with little no configuration.

It is all a little daunting at first, and I am far from having mastered it but have enjoyed it since I finally found the time to wrap my head around it. The great thing is loads and loads of more talented people have shared their configurations

Recently, I found myself swinging back into the land of the Linux desktop - it happens every few years, usually around the time Ubuntu releases a long term release. I am always working on Linux servers, but the idea of working with software created with such passion and for the love of it is always a enticing.

I have been working with an Ubuntu 20.04 based laptop where MAMP isn’t available. I would normally configure Apache or Nginx with every new project, which becomes tiresome quickly and I have not found another solution that works as well or reliably.

Well then! Before long I had built myself a docker compose file to quickly fire up a Wordpress development environment with a single command. I have used it with the last 15 projects without issue and am now using it across all platforms, Windows, Mac and Linux. Now I can have a wordpress installation up within a minute and can be coding moments later.

I hope someone else out there might find some use with it. If you have any issues, feel free to reach out on Twitter or Github

Clone this repo or download the zip directly then un-compress it.

For Mac and Linux

Using a terminal, navigate to a folder you want to house your project in, and run the following.

setup.sh will create the required folders, download Wordpress then configure the wp-config.php for this project.

Then download and unzip the Wordpress files to the /wordpress folder. You will need to update the wp-config.php details to match the following

Run the following from the root of your project.

Running the above for the first time will download the required docker containers, provided you don’t happen to have them cached locally from another project.

Once the above command is run, you should see a response like the following.

If all went well, you can now access your new Wordpress installation with the url http://localhost

To end your docker container, run the following from the root of your project. The local files used will still be in tact

The docker-compose file will setup a MYSQL server on port 18766 (this can be altered in the docker-compose.yml file). You can connect to the server using the following details 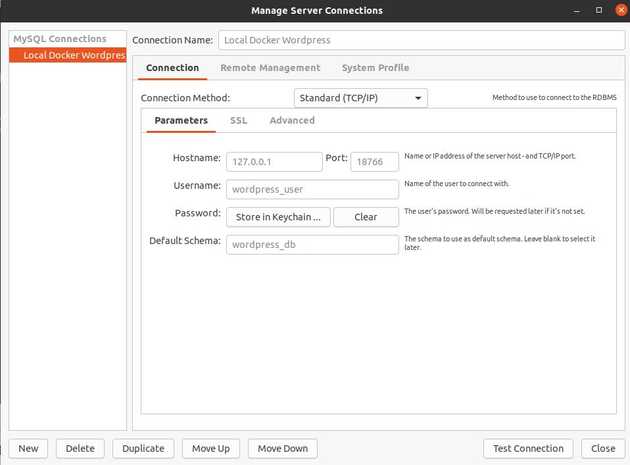 To find the ID of your container, run the following command

You will see an output like the following, we are looking for the wordpress:latest container.

You can see from our above example, that the container ID for wordpress is ed72061e0466 and the database container is 3b2678b45ad2

On mac and linux, you can use the following command to show a continuous reading of errors on your Wordpress install. Grab the ID from your wordpress container using the above instructions.

Swap CONTAINER_ID with the ID docker has assigned to your running container. Here is an example using the above example

Example setup of test instance using WP-Cli. This can be run after the setup.sh script to setup your wordpress instance.

Using the instructions above, find your container ID for the local-wordpress-db container(the example above shows 3b2678b45ad2)